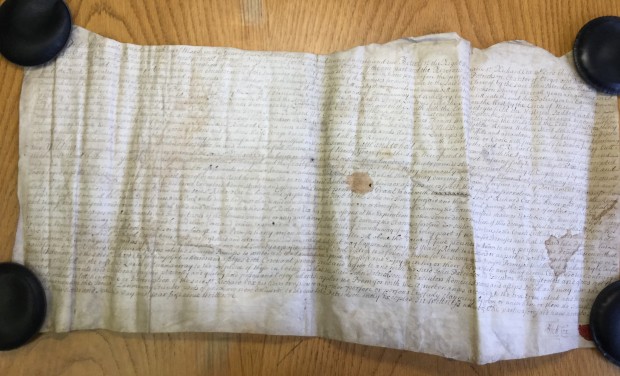 Figure 1. Signed and sealed only weeks after the death of King William III of England, this 1702 Cox–Patrickson indenture is over 300 years old. Written on parchment, the legal arrangement lists townlands that were once part of the Mac Carthy Gleann-a-Chroim estate only decades earlier. It also names 15 tenants who possibly settled in the area sometime during the mid- to late 1600s.

Conserved at the National Library of Ireland, this insightful 1702 indenture of lease records lands transferred, buildings and tenements thereon, as well as outlining additional mutual obligations between Sir Richard Cox (1650–1733), 1st Baronet PC and the Reverend John Patrickson (1644–1717) A.M., Chantor of the Cathedrals of Cloyne and Ross, and the Vicar of Fanlobbus.

The following text is reproduced in full as best interpreted from the manuscript, as well as using The Clerk’s Magazine; or, Law-repository as a reference to clarify words, terms etc.

This Indenture made the sixth and Twentieth day of March in the year of our Lord God one Thousand Seven hundred and two Between the Right Honourable Sr. Richard Cox Knt. Lord Chief Justice of her Majestyes Court of Common Pleas and one of her Majestyes most honorable Privy Council for the Kingdom of Ireland of the one part and the Reverend John Patrickson Chantor of Cloyn and Rosse on the other part.

to have and to hold all and singular the premisses with the Appurtenances, Except before Excepted unto the said John Patrickson his Executors, Administrators, and assignes, for and dureing the full Tearme and Time of Ninety nine years from the date hereof, and then, next Ensuing fully to be compleat and Ended, He and they, Yielding and paying therefore yearly and every year unto the said Sr. Richard Cox, his heires, or assigns, the Rent or Sume of one hundred and ninty pounds sterling current money of England by Equall portions att the two most usuall feasts in the Year (Viz), the feast of Saint Michael the Archangell, and the feast of the anunciation of the Blessed Virgin Mary, commonly called Lady day Clear Rent, without any deduction, and over and above all Taxes, charges, subsidyes, contributions, Impositions, or assessments, whatsoever knowne or unknown {Quit Rent exeepted} which shall, or may dureing the Tearm aforesaid by act of Parliament of otherwise be Taxed layed, or assessed, on the demised premises, or any part thereof, or on the Rent, hereby reserved or on the said Sr. Richard Cox, his heires, or assigns, in respect thereof, a full consideration being thereof had in the Rent, hereby reserved, and the said John Patrickson for himself, his heires, Executors, Administrators, and assigns, doth Covenant, promise, and Grant, to and with the said Sr. Richard Cox, his heires, and assigns, that he and they shall and will well and truly pay or cause to be paid unto the said Sr. Richard Cox, his heires, and assigns, the aforesaid Rent at the Gales, and Times aforesaid,

and shall and will during the Tearms aforesaid preserve and keep in good and sufficient order all the houses, buildings, fences, walls, Park walls, ditches, hedges, orchards, and other Improvements, that now are, or hereafter, shall be during the tearmes aforesaid, made, or Erected on the demised premises, or any part thereof, and in such good condition and repair shall yield and deliver Up unto the said Sr. Richard Cox, his heires, or assigns, at the Expiration, or other sooner determination of the demise,

and that the said John Patrickson, his Executors, Administors, or assigns, and all the tennants, and Inhabitants, of the demised premisses, or any other part of thereof shall and will during the Tearme aforesaid doe suit and service to the Courts Lett and Courts Baron to behold for the mannor of Dunmanway,

and shall, and will grind his and theire Corn, and grain exponded [sic] on the premisses at the Mills of Dunmanway, aforesaid being part of the demised premisses,

and that the said John Patrickson, Executors, Administrators, or assigns shall not alien his or theire intrest in the premise to any person whatsoever,

nor hereafter sell above the value of five pounds per annum to any person of the Popish religion without licence in writing from Sr. Richard Cox, his heires, or assigns, first had, and obtained provided,

nevertheless, that if it may happen the aforesaid Yearly Rent to be behind or unpaid in part or in whole at any the days or Times whereon therme ought to be paid as aforesaid, and by the space of one and twenty days after and noe suffitient distress to be found or to be taken for the same on the demised premisses, that then it shall and may be lawfully to and for the said Sr. Richard Cox, his heirs, or assigns, into the demised premisses to render [sic] and the same to have againe repossess and Enjoy, as in his, or their former estate, anything herein Contained to the contrary, notwithstanding.

And the said Sr. Richard Cox for himself, his heirs, and assigns, doth covenant, promise, Grant, and agree to, and with the said John Patrickson, his Executors, Administrators, and assigns, not to build any other Mill on the rest of the Lands of Dunmanway to the prejudice of those in being,

and that the said John Patrickson, his Executors, Administrators, and assigns, shall and may under the Rents, Reservations, covenants, and conditions aforesaid, peacefully and quitely hold, possess, and enjoy all and singular the premises with the appurtenances according to the true true intent and meaning of those presents without the [sic] lett, hinderance or interruption, of the said Sr. Richard Cox, his heirs, or assigns, or any other person or persons lawfully clayming by, from, or under him, or them the somorall [sic] Lease of the Tennements in the Towne of Dunmanway Countor parts of which are now delivered to the said John Patrickson onely excepted In Writing whose of The parties aforesaid have hereunto Interchangeably put Their hands and seals the Day and year first above Written.1

The reverse of the document is as follows:

Memorandum That it is Agreed between the within mentioned Partyes, that the within Rent shall be henceforward be Reduced & abated to One hundred & fifty pounds per Annum & in consideration thereof the Markets & faires & Customs and the custom to the maulthouse & the Covenant relating thereunto and all the houses in the Town except that formerly Whites & the Land East of the high road to Derylaghan (Derrylahan) are hereby granted and Resigned to the within mentioned Sr. Richard Cox  as from the date hereof. Witness their hands & Seales this 26th day of March 1708.2

Mr Patrickson may cut any trees he plants north of the highway to the Castle within 500 yards of that road. And the road to Derilaghan is to be straite [sic] and the present new Ditch to be the bounds to the West.3

(There is another piece of text to the left under the names, but it difficult to decipher.) 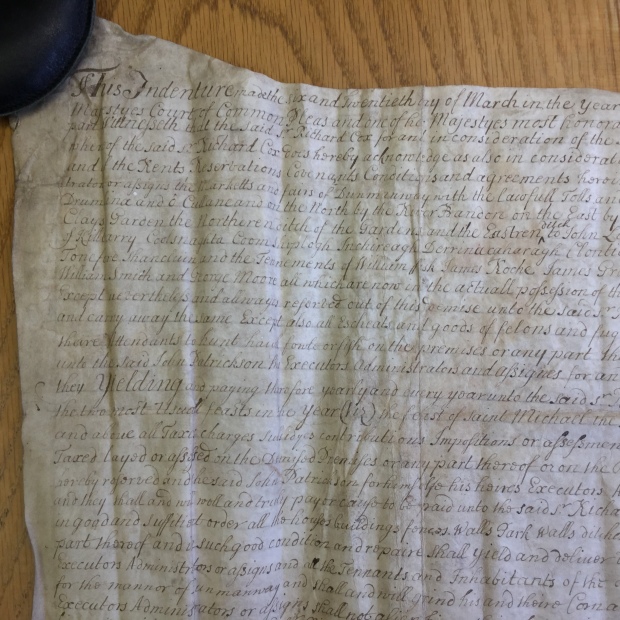 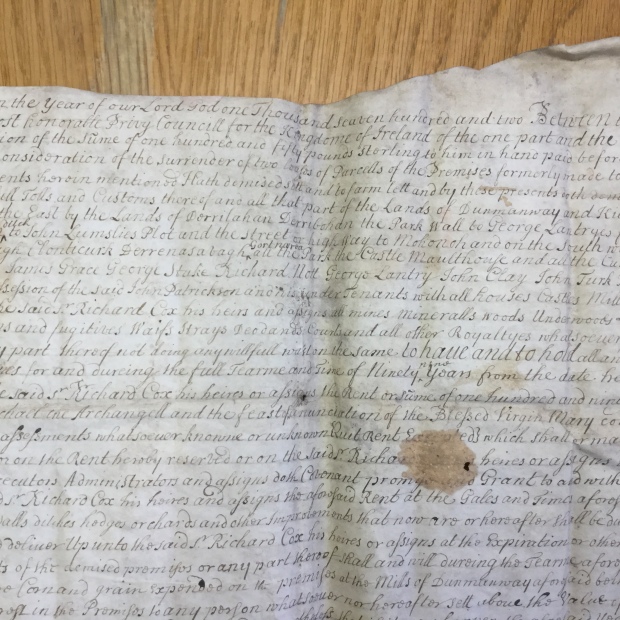 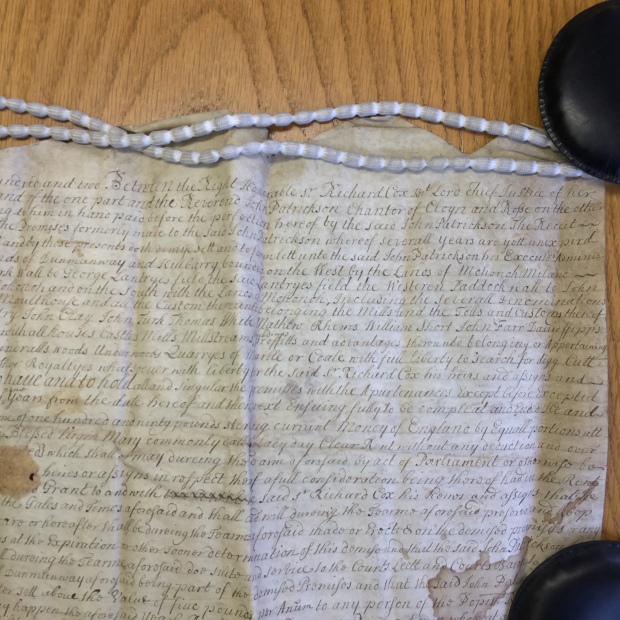 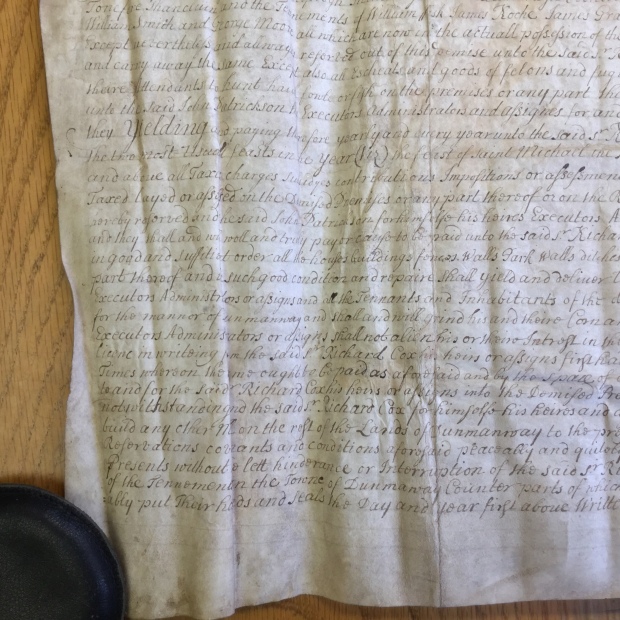 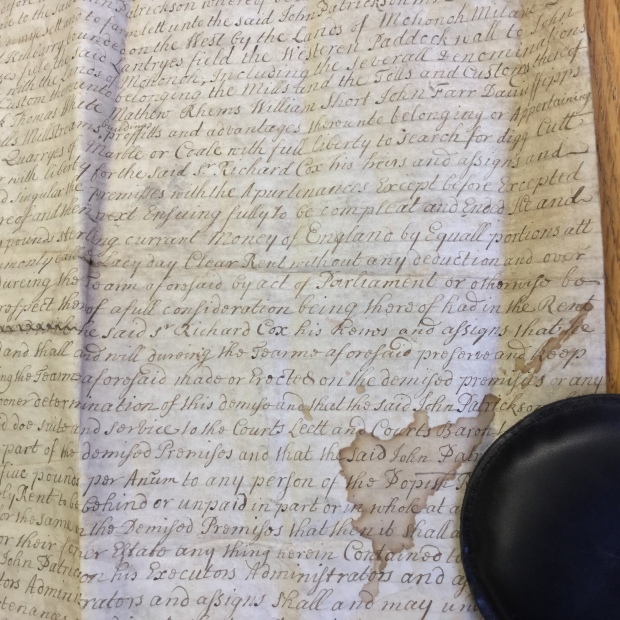 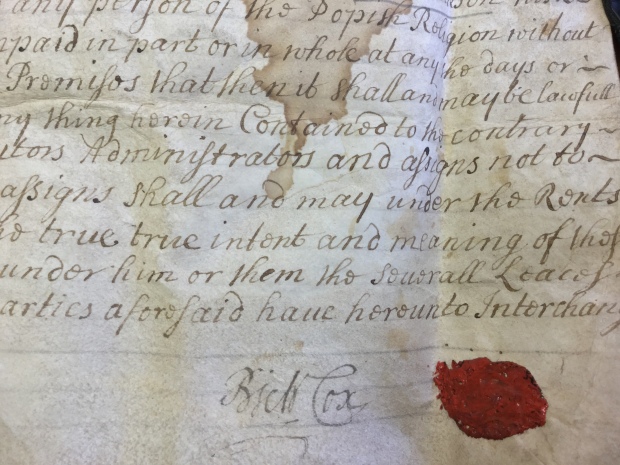 Figure 2. A collection of photographic images taken at the National Library of the 1702 Cox–Patrickson lease.

Figure 3. The Patrickson monument in St. Mary’s Church Dunmanway records the Reverend Patrickson’s death some 15 years after this 1702 lease. Sir Richard was to outlive the Vicar by another 16 years dying of  apoplexy in 1733.

Townlands in the Civil Parish of Fanlobbus